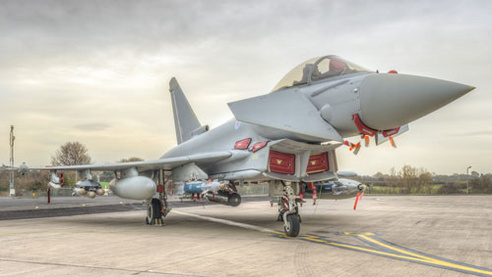 On December 16th the UK Royal Air Force announced that RAF Typhoon development was continuing as planned following three successful trials in the UK and Italy:

In the Italian trial, a Stormshadow cruise missile was released successfully from an Italian Typhoon and tracked to its target by radar. Stormshadow, already used successfully by RAF Tornados, is designed to be released at long range and can destroy hardened targets such as command bunkers.

A second trial, carried out by British firm BAE Systems at its airfield at Warton, Lancashire, confirmed that Stormshadow can be fitted to the RAF Typhoon. The two trials mean that Stormshadow is now closer to being fully integrated with Typhoon for operational use.

In the other UK trial, six Brimstone missiles were fitted to a Typhoon alongside two Paveway IV bombs. The trial confirms that Brimstone can be fitted to the aircraft, and allows the integration program to move towards airborne trials.

Brimstone has been used to great effect in Afghanistan and Libya, and is now being used in Iraq against ISIL forces. Its integration with Typhoon will enable the aircraft to attack targets with a high-precision weapon that minimises collateral damage.”

For more information, read the entire release by the UK RAF here.